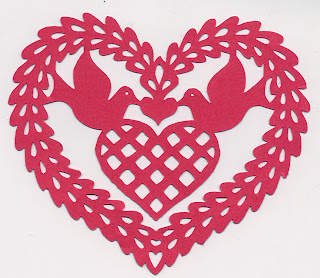 According to Quiet Valley Historical Farm in Stroudsburg, PA, “Scherenschnitte (pronounced something like Sharon-Sh-knit-a) is the German and Pennsylvania German tradition of cutting paper. Traditionally, these paper designs were done by folding the paper and cutting to make a continuous design similar to the childhood craft of creating paper snowflakes or paper dolls that hold hands.”  On Saturday, February 5, from 11:00 – 12:00 Wilton Historical will be offering a Valentine’s Day card-making workshop for kids, featuring scherenschnitte and its popular hearts and flowers motifs.  The workshop will be led by Museum Educator Catherine Lipper, who will talk about the history and customs of Valentine’s Day and its rise in popularity during the Victorian age, and, of course, scherenschnitte.  Kids will make their own Valentine cards and heart-shaped sugar cookies with a scherenschnitte-inspired decoration.  Sweet!

Did You Know?
“In the beginning, scherenschnitte were often used as decorative pieces for birth certificates, love letters, and marriage certificates. These tended to incorporate flowers, birds, and hearts. Since paper was originally expensive, old letters or newspapers were often used. This offers some unique insight into the lives of the people who made them. During the Victorian Era, scherenschnitte was used to make shelf paper for cupboards, cake doilies, or table decor.

Scherenschnitte can also create a picture or tell a story.  For the Germans, many of the picture cutouts were based on folk tales. These images usually featured people and activities, which shares a lot in common with the French tradition of silhouette cuts. Silhouettes, white images on black paper, were often inexpensive forms of art work. They were far less costly than paintings.” — Quiet Valley Historical Farm, Stroudsburg, PA