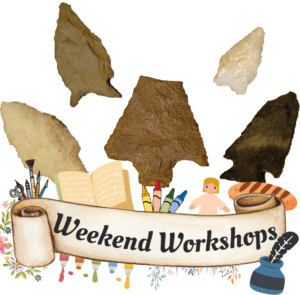 On October 8, 2021, President Joseph R. Biden Jr. proclaimed October 11 of that year Indigenous Peoples’ Day. The holiday has arisen in the United States in the last three decades as an alternative to Columbus Day, and was first celebrated in Berkeley, California in 1992. On October 8, from 11:00-12:00, Wilton Historical will be offering an Indigenous Peoples’ Day workshop for kids. The morning’s activities will include a discussion of the Siwanoy Indigenous Americans of Wilton and Norwalk and coastal Long Island Sound, followed by a wampum-inspired beading activity, and a basket-making craft. A traditional spice cake will be served as an acknowledgement of the formerly celebrated Columbus Day, and the significance of Christopher Columbus in the colonial spice trade. The event promises to be a festive and timely way to learn about the Indigenous peoples who called Wilton home for thousands of years.

Suggested for ages 6 – 10. Members: $10 per child; Non-members $15 per child.
Please fill out the form below to register or email info@wiltonhistorical.org

Did You Know?
The indigenous people encountered by English colonists in the 1700’s referred to the area north of today’s Wilton Center as Pimpewaug. The exact translation of Pimpewaug is unclear, but name refers to the Norwalk River and the surrounding Norwalk River valley. Today’s Pimpewaug Road is a reminder of the original name that Wilton’s first residents used.