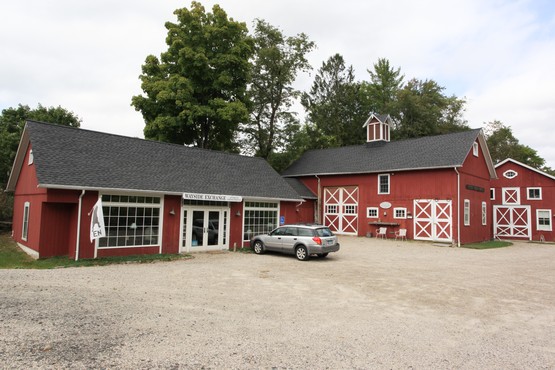 Shining examples of Adaptive Use

Since its founding in 1938, the Society has championed the preservation of historic buildings. With modest resources, the organization has managed to preserve and restore 17 of Wilton’s diverse 18th- and 19th-century structures, which otherwise would have been demolished.

It began with Lambert House, Wilton’s oldest extant dwelling, at the intersection of Route 7 and Route 33. Since then, the complex known as Cannon Corner, owned and operated by the Wilton Historical Society, serves as an historic entry point to Wilton from the north, and is in the heart of the Cannondale National Historic District. The Society, with the help of the Connecticut Department of Transportation, has transformed once run-down garages, and 19th century barn and blacksmith shop into an antiques shop, a woodworker’s studio, an office suite and residential apartment.  Together with Lambert Corner, another adaptive reuse project, and the Wilton Historical Society’s Museum Complex (Historic District #5) at 224 Danbury Road,  the three campuses are examples of historic preservation that helps keep the unique character and history of Wilton alive.

Adaptive use, the concept of using old buildings in new ways, allows commercial use to provide income for restoration and ongoing maintenance. First utilized in Wilton at Lambert Corner, it has been incorporated into the town’s Zoning Code.  Adaptive use has successfully preserved many buildings along Danbury Road, avoiding zone changes and more commercial strip development.  Wilton was in the forefront of the adaptive use movement in the 1970s; it has been a prime mechanism to avoid further destruction of the town’s character.

William Henry Monroe initially started his blacksmith shop with his partner Charlie Abbott on Hurlbutt Street in 1891. The pair moved the business to Georgetown several years after, but soon moved again in 1902 to the corner of Danbury Road and Olmstead Hill Road. Using materials from the barn they had occupied in Georgetown, Abbott and Monroe constructed the building that still stands today at Cannon Corner. Abbott died in 1913, but Monroe continued to provide blacksmithing services until his own death in 1935. The structure held several business after that, including a produce stand and a plumbing business, until it was acquired by the Historical Society in the late 1990’s and refurbished as part of the Cannon Corner property.