Lives and Landscapes: Art from the Permanent Collection 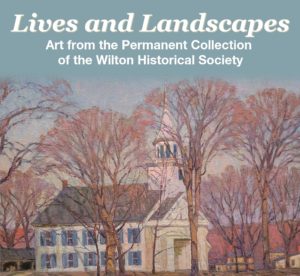 From the town’s beginnings in early 18th century, work depicting the people and landscapes of Wilton have reflected the ever-changing artistic tides of subject matter, materials and styles of the next three centuries. The new exhibition, Lives and Landscapes: Art from the Permanent Collection of the Wilton Historical Society, opening on June 10, explores highlights of the art collection from the colonial era to the 1970s. Throughout that time, Wilton has served as inspiration for a wide variety of creators. Whether simply passing through or ensconced as a long-time resident, pushing the boundaries of artistic expression or fulfilling commercial contracts, Wilton’s artists produced a diverse body of work. The exhibition runs through October 15th.

Members of Wilton’s colonial first families, such as the Lamberts, Beldens and Grummans, commissioned portraits to help display their wealth and power. The two works on display by itinerant painter Ralph Earl were prized – Earl’s patron’s included founding father Roger Sherman – as were the portraits produced by Gilbert Stuart Newton, nephew of the renowned Gilbert Stuart. Gilbert Stuart is best known for his iconic images of George Washington.

Over time, landscapes rose in popularity. Wilton’s sparsely populated countryside of the late 19th and early 20th Centuries provided beautiful scenery to be captured on canvas and a quiet place to work undisturbed, while Wilton’s proximity to the cultural hub of New York City ensured a large audience was easily accessible. Artists working in the new Impressionist style, seeking vistas to be painted “en plein air” populated the area – one of the leaders being J. Alden Weir and his “great good place” Weir Farm. Others like H.G Thomson followed soon after. In the early to mid- 20th century, a new group of artists emerged. Many congregated in the Silvermine area enjoying both the setting and the proximity to the city. Works produced in Wilton could quickly be placed in any of New York’s numerous museums and galleries.

Town landmarks, such as the 1790 Wilton Congregational Church painted in an impressionistic style “en plein air” by Robert Emmett Owen and the 1726 Lambert House by H.G. Thompson are beautifully depicted. Other artists represented in the exhibition include Richard Daggy, sculptor A. Phimister Proctor, and Hillary Longmuir.

Lives and Landscapes explores Wilton’s artistic legacy through a selection of rarely seen work from Wilton Historical’s permanent collection.  These works capture something of the personality of the town through the faces and places depicted. They tell the stories of not only the subject matter of the piece, but the story of a town.

Lives and Landscapes: Art from the Permanent Collection