The History Lecture Series is an annual collaboration between the Wilton Library and the Wilton Historical Society. Each year a theme is developed, and respected scholars are engaged to provide a lively, thought-provoking talk on their specialty subject. The lecture is followed by a question and answer period and reception. Generous sponsors make it all possible; each lecture is individually sponsored.

‘Jazzed Up: The History of Jazz in America’

The series is sponsored by the Charles Schwab Corporation. The media sponsor is The Wilton Bulletin.  Informal receptions follow each talk. There is no charge, but donations are always welcomed. Registration is required for each lecture individually.

Register at www.wiltonlibrary.org/jazzed-up-lectures-2020 or call 203-762-6334. Pre-registrants should arrive by at least 10 minutes before each session to be guaranteed seating; wait-listed and walk-in registrants will be admitted after that time if space is available.

With 2020 being Dave Brubeck’s centennial year, his son Darius will kick off the lecture series with an overview of the panorama of Dave’s life in music over several decades.

Born in 1920, Dave’s art and philosophy were decisively influenced by his experiences in the 1940s as a GI in World War II. Success and recognition came in the 1950s and, beginning with John F. Kennedy in 1960 and up to Barack Obama in 2009, nearly every President invited Dave and Iola Brubeck to the White House. Focusing on the flow of history, Darius has divided the century into decades using presidential terms as milestones and then has folded in major themes in Dave’s work. In his late career, Dave was perceived as a world figure representing a universal, yet typically American, brand of idealism.

During the 1970s, pianist and composer Darius Brubeck toured the world with Two Generations of Brubeck and The New Brubeck Quartet (Dave, Darius, Chris and Dan Brubeck). He moved to South Africa in 1983, where he initiated the first degree course in Jazz Studies offered by an African university, eventually founding the Centre for Jazz and Popular Music at the University of KwaZulu-Natal where he taught until 2005.  He continued performing internationally with many great South African musicians. He is now based in England and performs worldwide with The Darius Brubeck Quartet and Brubecks Play Brubeck.

During this program, Gil Harel, PhD, Brandeis University, will discuss the ways in which jazz as a medium was intertwined with the civil rights movement and the unrelenting drive towards social justice.

Throughout its storied history, jazz has been a catalyst for social change. Calling attention to the plight of blacks in the south, Billie Holiday’s gut-wrenching 1939 ballad “Strange Fruit” described the horrors of lynching during the Jim Crow era. Charles Mingus’s “Fables of Faubus” would cast a spotlight on the malfeasance of Arkansas Governor Orval Faubus and his defiance of federal orders for desegregation. John Coltrane, who grew up in the bebop era and would go on to pioneer new genres including modal jazz and free jazz, would add his voice to the chorus of those campaigning for social change. His powerful composition, “Alabama” – written in response to a heinous KKK bombing – would help galvanize a generation to action.

Gil Harel is a musicologist and music theorist whose interests include styles ranging from the western classical repertoire to jazz. Previously, he has served on the faculty at CUNY Baruch College (where he was awarded the prestigious “Presidential Excellence Award for Distinguished Teaching”) as well as at the Southwestern University of Finance and Economics in Chengdu, China. Currently he teaches at Naugatuck Valley Community College where he was presented with the “Merit Award for Exemplary Service to the College.” At NVCC, Dr. Harel conducts the college chorale, a cappella ensemble, teaches music history and theory, and serves as musical director of theater productions. Outside of teaching, he enjoys staying active as a pianist and vocalist. A regular jazz performer, he is a devoted interpreter of the style of McCoy Tyner.

The moderator is Max Gabrielson.

In this lecture, Chris Coulter will explore Louis Armstrong’s early life and his important recordings that laid the groundwork for his most influential and remarkable career as one of our country’s most prominent musicians.

Chris Coulter is a longtime local professional musician and Connecticut state-certified music educator. Chris currently leads a band dedicated to playing early traditional jazz and swing music named “The Blue River Jazz Band” www.theblueriverjazzband.com. Chris has been performing on saxophones, flute and voice for over thirty years and he currently teaches music in the New Canaan Public Schools. Chris has his Bachelor’s Degree in Music from the University of Bridgeport and his Master of Science in Music Education from Western Connecticut State University.

The moderator is Max Gabrielson.

In this lecture, Reggie Quinerly will address the factors, influences and artistic offerings associated with the unique period in America’s history that was the Harlem Renaissance.

During the 1920s, the African-American enclave of Harlem was the epicenter of a deep cultural transformation. This movement acknowledged and utilized the artistic expression of many brilliant thinkers. The impact of this Renaissance was widespread and became the essential crucible from which a new generation emerged.

Reggie Quinerly grew up in a rich musical environment in Houston and graduated from the Mannes School of Music at New School University where he got to study with three great drummers: Jimmy Cobb, Lewis Nash, and Kenny Washington.  After some time honing his chops on the scene, he returned to school earning his Master’s in Jazz Studies at the prestigious Juilliard School. He has played with such leading artists as Wynton and Branford Marsalis, Joe Lovano, Chico and Von Freeman, and Greg Osby. In 2017, he fulfilled a life-long goal of returning to higher education, this time as a Juilliard faculty member and in the summer of 2019, he joined the faculty at Hunter College. He holds a Supervisors certification and Vice-Principal and Principal certifications in Education. He is a member of Percussive Arts Society and the New Jersey Education Association.

Vocalist, pianist and composer Brenda Earle Stokes shares the rich history of women in jazz, focusing on the many contributions of the often-overlooked female instrumentalists and composers.

Brenda will discuss the struggles of women in the jazz industry and the many triumphs and advancements being made today. She will share music, video footage and will provide a list of resources to encourage further learning.

Brenda Earle Stokes is a rare jazz artist with a true command of both the piano and the voice as well as being a noted composer. In her recordings, she has explored a wide spectrum of material including jazz standards, original compositions, and seldom-heard compositions by Dave Brubeck and Steve Swallow. She has played alongside numerous jazz musicians and has held residencies at the Kennedy Center and the Banff Canter for Fine Arts as well as touring clubs and festivals as a bandleader across the US, Canada, New Zealand and Australia. In addition to her life as performer and composer, Brenda is active as an educator, serving on the faculty of Fordham University, running a busy private studio in New York City, and working as a guest clinician, adjudicator and speaker. She has taught for the Midori and Friends Foundation, developed curricula for the New York Pops Orchestra, and arranged music and taught for the Grammy-winning Brooklyn Youth Chorus. Her online courses, “Piano Skills for Singers,” have hundreds of students worldwide. 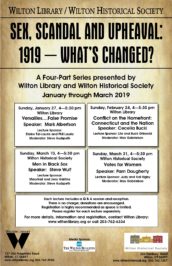 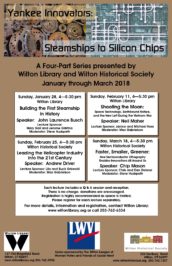 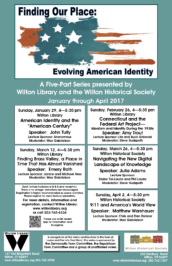 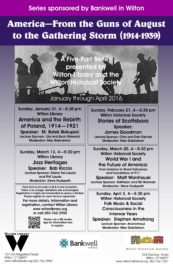 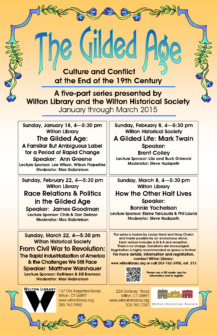 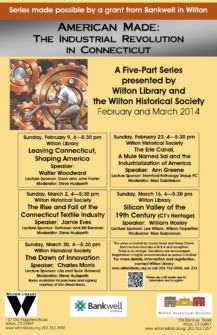 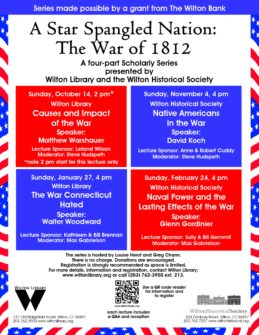 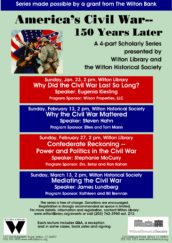 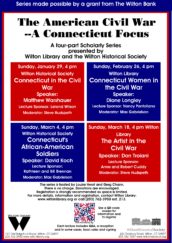 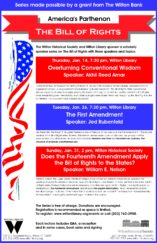 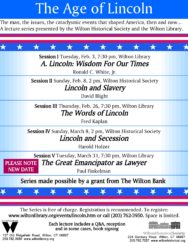 How the History Lecture Series Began

In 2008 Louise Herot, then President of the Wilton Library, Owen Williams and Dr. Greg Chann, Co-Presidents of the Wilton Historical Society – met up at the Kiwanis Roast Beef Dinner. There they hatched a plan to draw on the synergistic relationship and collaborative spirit that exists between the Society and the Library.
They characterized this project as one which:
Stimulates the minds of our fellow citizens,
Reminds us that history needs to be studied so that we don’t repeat the mistakes of the past,
Educates in a way that makes history come alive,
And one that brings new energy and facets to our organizations.