“Most people do not associate Santa Claus with war, but in fact the connection goes back to Santa’s very beginnings. Our popular image of Santa was created by cartoonist Thomas Nast during the Civil War. Nast’s first Santa illustrations, published in the January 3, 1863 edition of Harper’s Weekly, featured Santa visiting dejected Union soldiers.” * 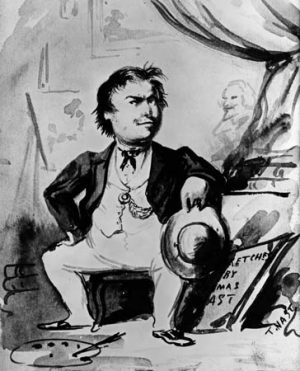 “Nast’s work in support of the Union cause was considered highly successful; in fact, it is said that even President Lincoln appreciated the artist’s work- he supposedly commented, “Thomas Nast has been our best recruiting sergeant. His emblematic cartoons have never failed to arouse enthusiasm and patriotism, and have always seemed to come just when these articles were getting scarce.”

Santa Claus before Nast was a tall, thin man; it is Nast who made him the fat, jolly, bearded man that we have today. For Nast, Santa was something of a propaganda tool. In his famous Christmas scene, which appeared in the January 3, 1863, issue of Harper’s Weekly, Santa, in his first appearance in a Nast cartoon, is shown entertaining Union troops by hanging Jeff Davis in effigy. 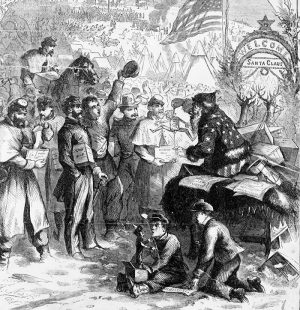 But not all of Nast’s Christmas work was overt propaganda. He also shows that even in the midst of the war, there was still some joy to be found in the Christmas holiday. In the far background of this drawing, some soldiers are chasing what appears to be a wild boar, perfect for Christmas dinner, while others play games, including the time honored medieval sport of climbing atop a greased pole to claim a prize. The drummer boys in the foreground, surprised by the jack in the box, tells us that children are in this war, too. In other Christmas cartoons, he reminded readers of the harsh reality of Christmas during wartime, especially the separation of soldiers fromtheir loved ones. 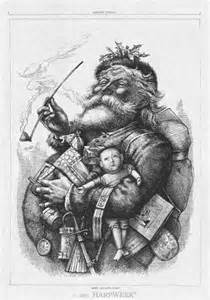 *The first paragraph of this article is from
The New-York Historical Society’s blog.
Click here to read more.

The balance is from an article by Niles Anderegg, “Thomas Nast and Civil War Christmas” which appears on the website of the Lincoln Cottage,
a national historic monument in Washington, DC.
Click here to explore the site.