Their dignity and essential humanity cry out to be held dear in these troubled times. 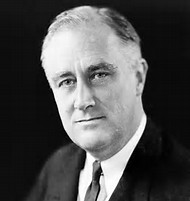 “We look forward to a world founded upon four essential human freedoms.

The first is freedom of speech and expression–everywhere
in the world.

The second is freedom of every person to worship God in his own way– everywhere in the world.

The third is freedom from want . . . everywhere in the world.

The fourth is freedom from fear . . . anywhere in the world.”

“There is only one speech in American history that inspired a multitude of books and films, the establishment of its own park, a series of paintings by a world famous artist, a prestigious international award and a United Nation’s resolution on Human Rights. 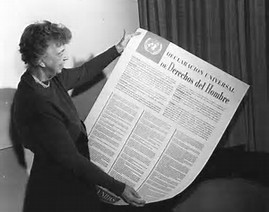 That speech is Franklin D. Roosevelt’s 1941 State of the Union Address, commonly known as the “Four Freedoms” speech. In it he articulated a powerful vision for a world in which all people had freedom of speech and of religion, and freedom from want and fear. It was delivered on January 6, 1941 and it helped change the world.

The words of the speech are enshrined in marble at Four Freedoms Park on Roosevelt Island in New York, are visualized in the paintings of Norman Rockwell, inspired the international Four Freedoms Award and are the foundation for the Universal Declaration of Human Rights adopted by the
United Nations in 1948.” 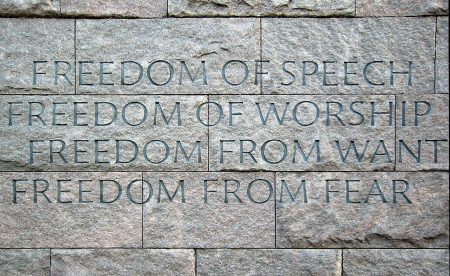 This article is excerpted from “The Four Freedoms Speech Remastered” by Paul M. Sparrow, Director, The National Archive, “Forward with Roosevelt” blog

Click here to read the entire article and to see a new HD video of President Roosevelt giving the Four Freedoms speech.