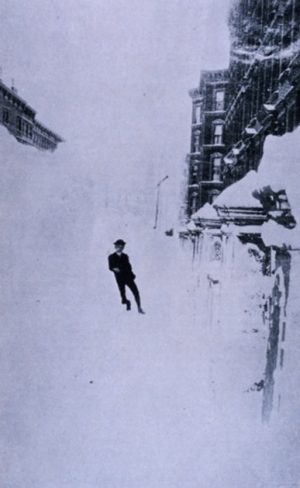 The storm lasted 36 hours with snowfall totaling over 40 inches in New York City. Temperatures were extremely low, and the wind created drifts up to the second floor of buildings, and higher. Over 400 persons, 200 in New York city, died from the surprise storm. 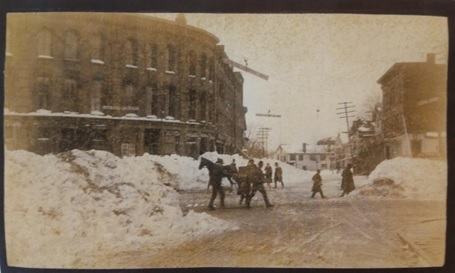 In 1963, local writer Bob Carboni interviewed a number of Wilton residents who told their stories:

Clinton Seymour (1871-1965), was sixteen years old at the time and lived on Millstone Road. He recalled that the blowing snow and cold air made ice freeze over his eyes. Snow kept drifting over the top of the barn door, making the task of feeding the horses and cattle more difficult. Harry Jackson, then of Sturges Ridge and aged thirteen, remembered digging a two-hundred-foot-long tunnel through twelve-foot drifts between the house and the barn. Snow covered the apple trees in their orchard with drifts up to twenty feet deep. A tunnel was dug on Hurlbutt Street to permit traffic to pass through.

Archer Abbott remembered that the wind was so strong that it blew snow right into some houses to a depth of several feet. Tim Merwin, five years old in 1888, remembered seeing two yoke of oxen pulling a sled passing by his house with the sled runners at the level of the second story window. He also saw oxen pulling an upside down sled as a snowplow. In the Center, a tunnel was dug through
a drift on (Old) Ridgefield Road. 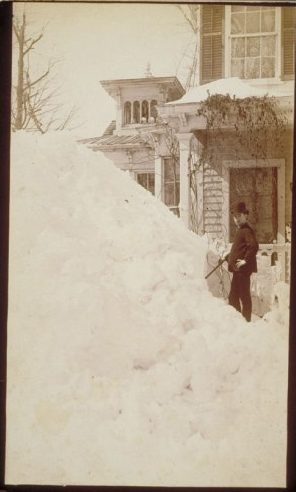 Dick Fitch, twenty-two at the time, wrote later of his trip from his house to the railroad station on Monday morning, when the storm was less than twenty-four hours old. He found the railroad crossing and the bridge (Fitch’s Crossing) blown totally free of snow. But deep drifts as he walked north past Cottage Row (partially constructed at the time). At the station, the southbound train arrived two hours late, covered with snow up to its smokestack, picked up Fitch and other passengers, and headed toward Norwalk. Less than a tenth of a mile down the track, the train ran into a big drift. All the trainmen and many passengers got out and cleared a path, and the train grunted off until it reached the next drift, where the scenario was repeated. It arrived in Norwalk two-and-one-half hours later. 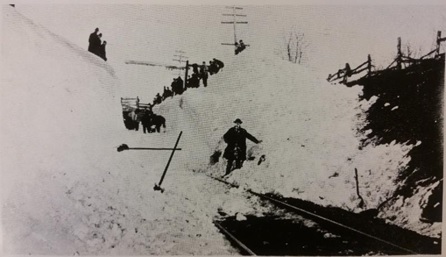 The next train did not run for three more days. His sister, Helen (Nellie) Fitch Sturges, wife of John Burr Sturges, kept a diary. She recorded that by noon on Monday it was impossible to reach the woodpile so in the cellar they found old pieces of a bin to burn. Her husband and son had great difficulty reaching the barn to care for the animals. Only one door of the house could be opened and the snow in front of it was five feet high. Some people actually had to exit from their second floor windows. Although the sun came out on March 14, Hurlbutt Street was blocked until March 31.”* 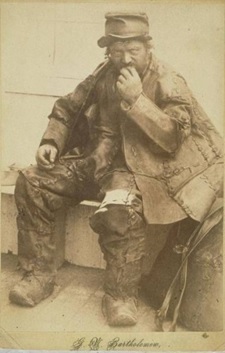 Even the Old Leatherman, a fixture of New York and Connecticut history, was reportedly delayed four days by the Blizzard of 1888. “The Old Leatherman was never a resident of Wilton, but he was an important part of the community for nearly thirty years, from 1860 – 1889. A wanderer, clad all in leather from hat to boots, and carrying a leather knapsack, he passed through Wilton about every thirty-four days on a regular route from east to west. He never spoke, but would communicate with gestures. He accepted meals from residents along his route, but would not enter a house, preferring to sit out back and eat, then be on his way. It was considered an honor to feed the Leatherman as he was very selective about where he ate.”*

To learn more about the Blizzard of 1888,
Click here for an account of the storm’s impact on Connecticut

Click here to learn more about the Old Leatherman