Find out where they stopped, and what happened! 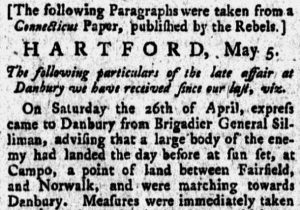 On April 27, 1777, approximately 1800 troops under the command of British General William Tryon marched towards Compo Beach after they burned houses and destroyed twenty-two storehouses of supplies, including 1,690 hard-to-replace tents, in Danbury. 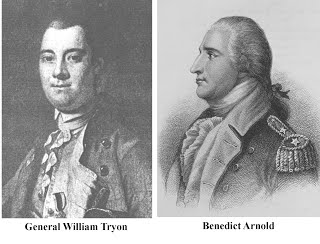 In Ridgefield, the British encountered a hastily erected barricade across the north end of the main street, and battled with several hundred patriot fighters of the Connecticut Militia, who were well armed and ready to defend their land and freedom. Led by Generals Benedict Arnold and Benjamin Gold Silliman, the Americans inflicted casualties on the British and delayed their progress. Major General David Wooster was mortally wounded, while General Arnold was nearly captured after his horse was struck by nine bullets and killed, as witnessed by Jesse Nichols of Wilton. 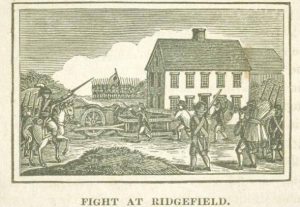 Upon their retreat further south, the British fired a cannonball – a visible “souvenir” – at T. Keeler’s Inn, where it remains lodged in one of the Keeler Tavern corner posts to this day. 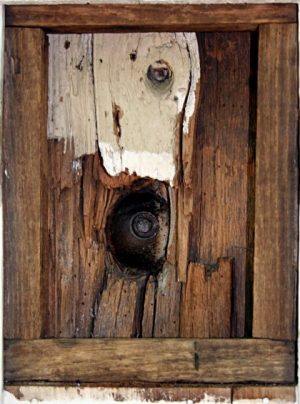 Excerpted from Wilton, Connecticut by Bob Russell:
“The Wilton Militia, led by Lieutenant Seth Abbott, were participants in the stand at Ridgefield. Nathan Betts IV was killed and two were wounded: John Waterbury Jr. and Theophilus Mead, who was wounded by a musket ball in the hip. James Olmsted V and Jacob Patchen were taken prisoner but escaped. Other Wilton militiamen known to be in the battle included Captain Azor Belden, Ensign Samuel Olmsted, David Dunning, Nathan Gilbert, Matthew and Ezra Gregory, Matthew Hanford, Alvin Hyatt, Uriah Keeler, Jesse Olmsted and Moses Scott. Elihu DeForest, a Wilton native, served as a captain of the Ridgebury Militia. 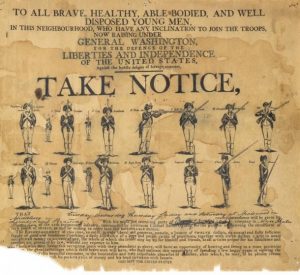 After camping for the night, the British passed quickly through Wilton on April 28, coming south on Ridgefield Road. During this march, the only Wilton citizen to be arrested was Benjamin Keeler of Bald Hill (742 Ridgefield Road), probably for firing upon the British. Benjamin was an Episcopalian and a Patriot, an atypical combination. 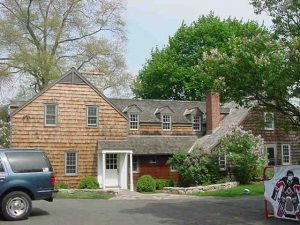 Samuel Keeler IV (652 Ridgefield Road) suffered the loss of several cows, carried off by the British. When all loss claims were finally recorded by the state government fifteen years later, Samuel claimed a loss value of 30 pounds 15s. 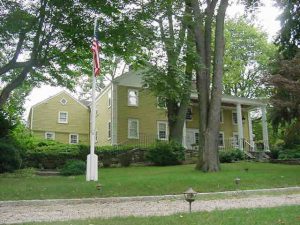 The next stop was the home of Captain Samuel Comstock at 433 Ridgefield Road, occupied by his wife Mercy. She set her table with tempting food and wine, buried her silver, and hid herself on the hill behind the house. When the British arrived, they partook of the feast and left the house undisturbed. 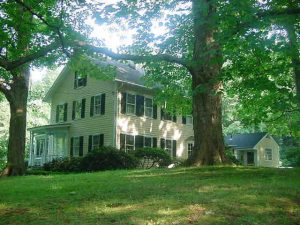 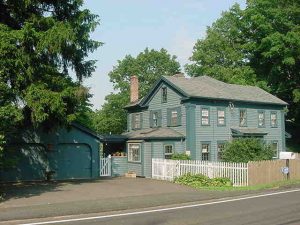 Samuel Middlebrook of Middlebrook Farm fled from his house (274 Ridgefield Road) with his wife and children, but the British entered, broke a large mirror and drained a hogshead of rum. His claim was 14 pounds 9s. 11d. 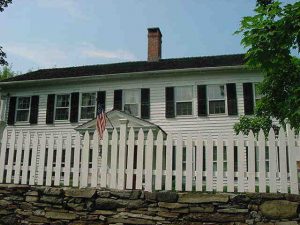 At the intersection of Ridgefield Road with Belden Hill and Mill Road, the troops entered the house of Daniel Gregory (11 Belden Hill Road) and were greeted by Daniel’s aged mother who shook a poker at them “to show them which side I am on.” 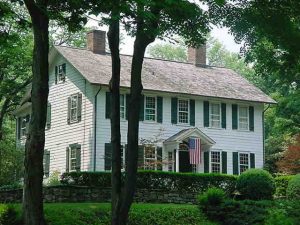 Having been warned of a possible ambush by militia units on the main road (now Old Ridgefield Road through Wilton Center), the British detoured down Mill Road, which then crossed the valley north of Merwin Meadows and joined (Old ) Danbury Road at the Burlock (now Dana) house. At the bridge over Norwalk River, they found and destroyed 100 barrels of rum, several chests of arms, many cartridges (bullets and power wrapped in paper), 300 tents, and the forge and bellows of Captain Clapp Raymond, a blacksmith. All of this had been hidden there for safekeeping as the Americans did not expect the British to take this route. Upon reaching Samuel Belden’s store, the troops began to pillage it but stopped when they discovered his Loyalist allegiance. Across the street at Captain Raymond’s (249 Danbury Road), they attempted to set fire to his barn, but his Tory neighbor Mrs. Belden and her Indian slave Bill Tonquin put out the fire. Raymond later claimed damages of 34 pounds 3s. 10d.

Tryon continued his march up Dudley Road, pausing to loot the home of Lieutenant Seth Abbott (149 Dudley Road), to the extent of 55 pounds 7s. 3d. damages. 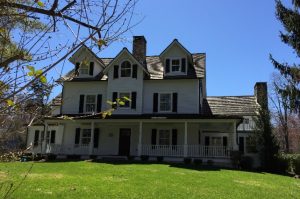 On Chestnut Hill there was a brief skirmish with 500 American Continental Army troops commanded by Colonel Jedediah Huntington. Colonel Huntington had collected General Wooster’s troops in Ridgefield and made a forced march to Wilton. Several shots were exchanged and six Americans were wounded, none of whom were from Wilton. From the ridge of Chestnut Hill, Tryon could see that another group of militia lay in wait for him at the only bridge across the Saugatuck River (Old Kings Highway in Westport). The land had been cleared long before 1777, and one could see great distances from the hilltops. Benedict Arnold had outflanked him to get there first. Tryon detoured again (across today’s Red Coat Road in Westport), fording the river (at the intersection of Ford Road and Clinton Avenue, now marked by a monument) and after another skirmish at the shore, safely reached his ships at Compo Beach. Patriot reinforcements arrived too late. Arnold was promoted to major general for his exploits during Tryon’s four-day raid, but without the seniority that he felt he deserved. He never forgave the Continental Congress for this slight.”