Happy 4th of July!
Did you know? 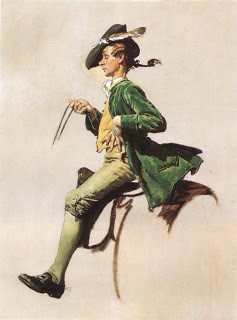 Most Americans are familiar with the Yankee Doodle tune, and can recite some of its familiar verses, but few are aware that the song was originally adopted in this country during the French and Indian War in 1755.

However, it is not well known that the original Yankee Doodle was Thomas Fitch V from Norwalk, whose two younger brothers Ebenezer and Timothy, lived on Chestnut Hill in Wilton. Back then, Wilton was still part of Norwalk, not to become a town until 1802.

Colonel Fitch, whose father was the Governor of the colony of Connecticut, was a distinguished officer in the French and Indian War and the Revolutionary War. In 1755, Col. Fitch led Connecticut volunteers in their fight against the French at Fort Crailo, in what is now Renssaelaer, New York. On their departure from Norwalk, the local young women, distraught by the lack of uniforms, improvised plumes from chicken feathers for their hats.

The poorly dressed Connecticut volunteers arrived as reinforcements for the well dressed British troops, and were met with derision from a British surgeon, Dr. Shuckburgh, who soon penned the satirical verse, set to the tune of a popular song “Lucy Locket”. Thus was Col. Fitch dubbed Yankee Doodle:

Yankee Doodle went to town,
Riding on a pony,
Stuck a feather in his hat,
And called it macaroni

The exact origins of the term “Yankee Doodle” are obscure, the British used the term pejoratively to refer to the colonists. While the song was meant to be a low brow jeer, it was soon adopted by the Americans with much enjoyment. The tune was already familiar to both British and Americans as a popular martial marching tune, so it caught on quickly with the colonists. It became their signature tune during the Revolutionary War, and was often played while fallen British troops were paraded before their captors. 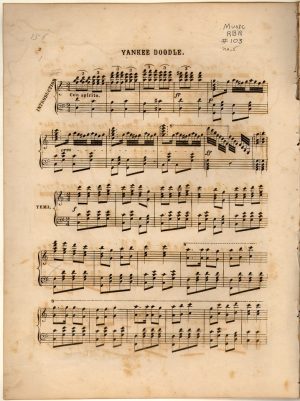 It might surprise some that the term “macaroni” in the song does not refer to pasta, but to a fashionably dressed group of young men in London who were often called macaronis and gathered at the Macaroni Club. According to the verse, Col. Fitch led his rag-tag group of Connecticut volunteers into Ft. Crailo, stuck a feather in his hat, and declared he was “macaroni’ — a fop. 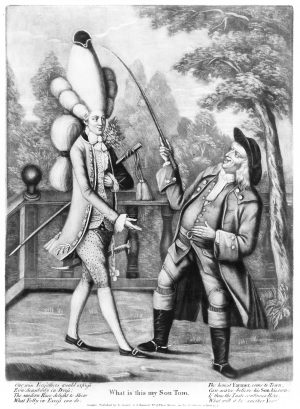 What! Is this my son Tom?”, a June 24th 1774 caricature on extreme “Macaroni” fashions of the 1770s (with a “big hair” hairstyle which echos women’s aristocratic styles of the time).

Housed in the Wilton Historical Society’s archive is a delightful book, The Birth of Yankee Doodle by Ferenze Fedor, once president of the Norwalk Historical Society, who wrote the book to commemorate our country’s bicentennial celebration. Much of the information about the origins of the term “Yankee Doodle” came from that book.