American presidents are traditionally associated with Air Force One, the State of the Union, “Hail to the Chief,” and the West Wing. 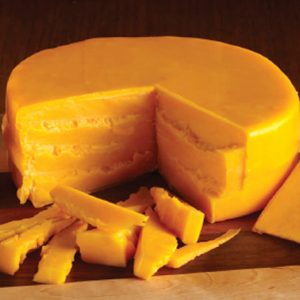 Historically, however, they’ve also been paired with – yes, really – large wheels of cheese.

The tradition began in 1802, when President Thomas Jefferson was given a gift of a giant cheese from the citizens of Cheshire, Mass. The cheese was the idea of Baptist Elder John Leland, a Jefferson supporter in the fraught election of 1800 in which Jefferson (a Republican) defeated John Adams (a Federalist). It was made from the milk of 900 impeccably Republican cows and pressed in an outsized cider press. When finished, it measured four feet across and 17 inches high, and weighed, once cured, 1,235 pounds. Engraved with the patriotic motto “Rebellion to tyrants is obedience to God,” the cheese was shipped to Washington via sleigh (hauled by six oxen), sloop, and wagon.

It arrived on Dec. 29, 1801, and Leland himself was on hand to present it, pointing out – somewhat uncomfortably to slave-owning Jefferson – that the cheese “was produced by the personal labor of freeborn farmers and with the voluntary and cheerful aid of their wives and daughters, without the assistance of a single slave.” 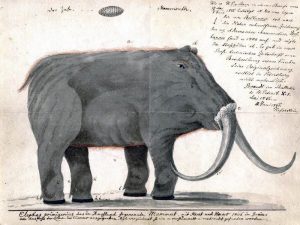 The gargantuan Jeffersonian cheese was the first object to which the word “mammoth” was applied as an adjective. The first complete mammoth skeletons had recently been excavated from a marl pit near Newburgh, New York, and were on display in Charles Willson Peale’s Philadelphia Museum – where they so caught the public’s fancy that the word “mammoth” was soon used to describe anything of
remarkable scope or size.

The mammoth cheese was stashed in the East Room of the White House – promptly dubbed the “mammoth room” – where it awed visitors and inspired poet Thomas Kennedy to compose an ode in its honor, in eight verses beginning “Most excellent, far fam’d and far fetch’d Cheese!” 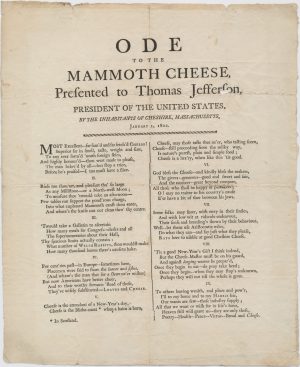 It’s not clear what ultimately happened to the cheese, though Jefferson’s guests appear still to have been eating it a year later. One story holds that its remains were eventually tossed into the Potomac River.

But the gifting of a big cheese didn’t end there. An even more mammoth cheese arrived at the White House in 1835, a present to President Andrew Jackson from Col. Thomas Meacham of Oswego County, New York. Meacham wasn’t a fan of Jackson (he had supported Jackson’s rival, Henry Clay), but he hoped that the cheese would serve to advertise the exceptional industry and ingenuity of his home state. Meacham’s cheese, which weighed 1,400 pounds, was paraded through New York in a wagon decorated with flags; then shipped to D.C. via schooner. 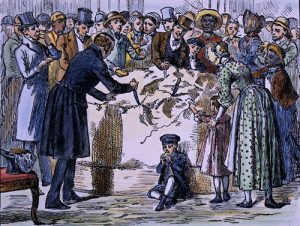 Jackson, like Jefferson, displayed his cheese in the East Room – the White House’s largest reception room – and served it to a crowd of 10,000 on Washington’s birthday in 1837. The cheese was said to be a hit, despite its powerful odor (“so strong as to overpower a number of dandies and lackadaisical ladies,” according to The Portsmouth Journal of Literature and Politics.)

The guests polished it off in two hours, leaving behind only the smell – so penetrating and offensive that the staff of incoming President Martin Van Buren was forced to spend days airing the East Room carpets, stripping down the curtains, and whitewashing the walls. Van Buren subsequently banned the serving of food at White House receptions.”
This article was excerpted from:
What’s More Presidential Than a Gift of Big Cheese? by Rebecca Rupp, National Geographic’s The Plate, February 23, 2015
Click here to read the entire article

Thomas Jefferson was obsessed with mammoths! Click here to read a fascinating article about his pet project to prove they still lived during his lifetime.