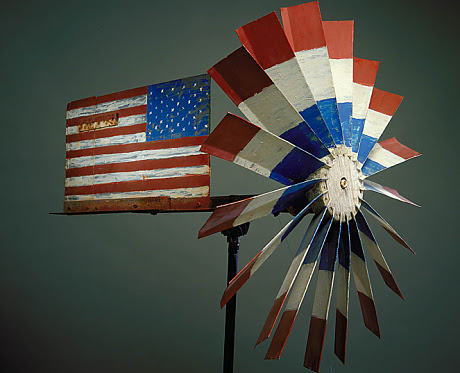 “English-speakers, and particularly children, began spinning whirligigs as early as the 15th century. Since then, “whirligig” has acquired several meanings beyond its initial toy sense. It even has a place in the common name of the whirligig beetle, a member of the family Gyrinidae that swiftly swims in circles on the surface of still water. The word whirligig comes to us from Middle English “whirlegigg” which is itself from whirlen, meaning “to whirl,” and gigg, meaning “(toy) top.” 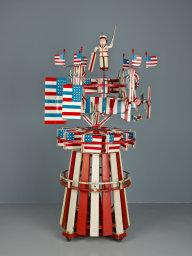 “Whirligigs, three-dimensional, wind-driven articulated toys, have been created by artists, self-taught and otherwise, for more than 200 years in this country. In the book ”Folk Art in American Life,” by Jacqueline Atkins and Robert Bishop (Viking Studio, 1995), the authors . . . .distinguish the weather vane from the whirligig. They write: ”These small, animated statues or structures were created strictly for amusement, for, unlike weather vanes, they do no more than signal that the wind is blowing or not blowing. They also allow a great deal of scope
for creative expression.” 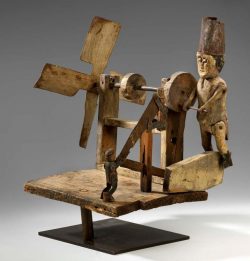 The authors write that no 18th-century examples seemed to have survived, but that whirligigs were ubiquitous by the 19th century. They quote a reference to one in Washington Irving’s ”Legend of Sleepy Hollow,” from 1819: ”Thus, while the busy dame bustled about the house, or plied her spinning wheel at one end of the piazza, honest Balt did sit smoking his evening pipe at the other, watching the achievements of a little wooden warrior, who, armed with a sword in each hand, was most valiantly fighting the wind on the pinnacle of the barn.” 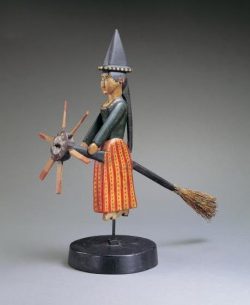 There are a few outstanding collections of whirligigs in museums in this country, notably the Smithsonian, the Abby Aldrich Rockefeller Collection at Colonial Williamsburg, and the Shelburne Museum, in Shelburne, Vt. The Shelburne boasts a whirligig trade sign: A woman seated at a spinning wheel moves her foot up and down on the treadle as the wind turns the wheel. . . . Whirligigs appeal to contemporary artists, who tend to label
them kinetic sculpture.”

Definition from the online Merriam-Webster Dictionary